“Vicky is a great listener and has the rare skill of being able to discern key points from 'stream of consciousness' discussions, helping to better define the brief for the project. This is immensely useful and time saving.”

I was going for a run the other morning when it dawned on me that 2019 marks my 25th year in international higher education (which certainly makes me feel my age). 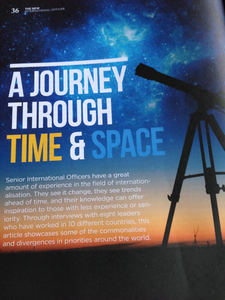 It stood me in good stead for my next International Office role at Edinburgh Napier University. This was ostensibly an International Recruitment Officer post, but (thanks to a long-term vacancy) started off with a frantic scramble trying to organise an international orientation programme and getting new students settled in. From international recruitment (which seemed to involve marketing and communications as well), my remit broadened to include international partnerships and establishing a study abroad programme, as I worked my way up to Deputy Director.

Then, in 2000, I moved to the other end of the UK to set up Bournemouth University’s first International Office. It was helpful to have had hands-on experience of so many different roles myself. New challenges included taking over from the Business School the management of preparatory English programmes, which introduced me to the worlds of academic administration and, in due course, public-private partnerships. I also experienced my fair share of institutional politics thanks to thirteen years on the University Leadership Team.

Since 2013, I’ve been working for myself as an independent consultant, specialising in international strategy development and planning for higher education providers and related organisations. That’s provided me with some wonderful insights into the cultures and priorities of different types of institution – both in the UK and overseas.

So, what’s changed in the world of international higher education over the last 25 years?

I’m going to highlight three key changes – one at individual / operational unit level, one at organisational level and one at national / international level. They’re drawn mainly from my experience of the UK context, so I’d be interested to hear whether they resonate in other parts of the world.

There is no doubt that the last 25 years have seen a marked professionalisation of International Office roles and operating practice. There are clearly demarcated functions, with career paths and opportunities for professional development. It isn’t just assumed that, if you work in an International Office, you can turn your hand to anything vaguely ‘international’.

Decisions are driven more by insight, market intelligence, data and evidence – and less by gut feel. In the early days, before international student recruiters really had regional specialisms, I remember thinking that some people seemed to have landed themselves a plum role as ‘international officer for small islands in the sun’. They would pop up seemingly randomly in Mauritius, Cyprus or Penang.

Now, there is much more robust strategy behind international engagement plans, with expenditure needing to be justified, business cases made and return on investment measured.

In late 2016, I interviewed eight Senior International Officers (those in Vice-President, Director, Head of Office roles – or equivalent) from a range of different countries for an article published in the EAIE’s Forum magazine (pp.36-38 of this pdf) on ‘the shifting profile of the modern international officer’.

Their stories tended to be a variation on my own (studied languages, spent time overseas, liked building intercultural relationships, fell by chance into an International Office role and worked their way up). They observed that, looking into the future, they foresee ever greater professionalisation, with specialist roles requiring regional knowledge, geo-political nous, specific skillsets and the ability to straddle cultures.

Institutional understanding of internationalisation has broadened and deepened

Another major change is the integration of an international ethos across entire institutions, rather than ‘responsibility for international’ being vested within an International Office silo.

I recall the days when letters (yes, snail mail letters) with an overseas stamp would automatically get delivered to the International Office, regardless of the department on the address, because ‘they’ll know how to deal with them’!

I interviewed an academic colleague in the early 2000s. He commented that the aspiration of any International Office should be to ‘do itself out of a job’, in other words to make itself redundant because an international perspective has become fully embedded in the thinking and actions of every single member of staff, and in every strategy and process. Nobody would need reminding.

Since then, there has been increasing recognition that attracting international students is just one small element of internationalisation. Most UK HEIs have recognised that having (and fostering) a global outlook is an important part of being a university on multiple levels. Over the last fifteen years or so, this has increasingly been reflected in organisational strategy and supporting infrastructure.

Certain functions that used to sit firmly within the International Office (e.g. international student support; international partnerships; international exchanges; international marketing and student recruitment) were gradually brought into the mainstream. They were aligned more closely with (or, in many cases, absorbed into) other relevant professional services, recognising the benefits of inclusivity and embeddedness over segregation and silo working.

More recently, in a few institutions, the dedicated internationalisation strategy, the dedicated senior management post and the dedicated International Office seem to have served their purpose as catalysts for integration – and have ceased to be required in the same way.

Most UK HEIs are not yet at that stage of maturity, though some seem to be heading in that direction.

But there is another layer to consider. Concerns exist not just about whether internationalisation is fully integrated, but whether the type of internationalisation being pursued is ethical and sustainable (for all concerned). That is a question that only a very few UK institutions are beginning to grapple with, but an area that is likely to come under increasing scrutiny.

It is tempting to look back with rose-tinted spectacles to the time when the UK was seen as an outward-looking nation and government policies supported a widely held perception that students and staff from beyond our islands would be welcomed with open arms.

From 1994/95 to the end of the first decade of the 21st century, international student enrolments grew and grew (despite the Asian financial crisis of 1997, despite the SARS and bird flu outbreaks of the early 2000s). Tony Blair’s 1999 Prime Minister’s Initiative provided an additional boost and sent out some positive signals to the rest of the world.

The Post-study work route (PSW) was introduced in 2004, making the UK an even more attractive destination – until the 2010 election when the aim to reduce net migration to the ‘tens of thousands’ was positioned as the centrepiece of UK migration policy. Immigration requirements started to tighten in 2011 and PSW was closed in 2012. There was a downright refusal to consider removing international students from the net migration target.

Growth slowed drastically and, despite some minor tweaks in recent years designed to ease the way for international students studying certain subject areas or at certain HEIs, the damage has been further exacerbated during and since the Brexit referendum campaign. The rhetoric of the Leave campaign and large swathes of the media left the UK looking insular and xenophobic. A far cry from the outward-looking nation of earlier decades.

Higher education institutions and the individuals working in them have expended (and are still expending) a huge amount of energy and effort trying to counteract these impressions. Although frustrating, this has perhaps been good for us.

It could be argued that we had become complacent about our ability to attract overseas talent. That we took for granted other countries’ interest in partnering with us. That we were concerned only about maximising income. That it was all take and no give.

In recent years and, particularly, since the referendum, UK institutions have had to do some serious soul-searching about different ways to ‘be international’. There is much greater focus at national level (and therefore at institutional level) on outward mobility of domestic students and on the need to reach out to the underrepresented groups who benefit most from this experience.

But the national strategy needs to go broader than outward mobility. Whatever the incentives, study and work abroad opportunities will only ever be possible for a minority of students: those who are willing and able to travel. We need to consider how best to provide the static majority with an international or intercultural experience. And how curricula can be made more globally relevant.

The critical ‘international’ question for leaders within the UK HE sector over past decades has tended to be ‘how do we make the UK as attractive as possible for international students?’. Some are now seriously addressing another question: ‘how do we equip our domestic graduates to thrive in a world where they constantly need to engage across cultural boundaries?’

Some of us were urging our institutions to consider this latter question 15 or more years ago (I just had a flashback to a presentation I gave at a Bournemouth University senior staff seminar in 2004).

Perhaps our recent challenges as a sector will force this higher up the agenda at more institutions? (Or perhaps financial constraints post-Augar will send us scuttling back to a fixation on maximising income from international student fees?)

Having become more professional at organisational unit level, having engaged with a broader understanding of internationalisation at institutional level, and having gone through some soul-searching as a result of what has happened at national level, what’s next?

However I hope very much that, over coming years, we will critically engage with the ‘why’ of internationalisation (perhaps embracing the continental European perspective that it is ultimately about enhancing quality), question our practice from an ethical and sustainability point of view and remember that the benefits of internationalisation should be felt by all stakeholders.

If, in 25 years’ time, it is second nature to consider the global implications of our decision-making without prompting, we’ll be further ahead than we are today.

Vicky Lewis Consulting is an independent consultancy specialising in international strategy development and  planning for Higher Education Institutions and other organisations with an educational emphasis. Vicky is also a Consulting Fellow with Halpin Partnership.

If you would like to receive (infrequent) updates via e-mail (early notification of new blog posts, suggestions of interesting reports or articles), please sign up to our update service - see 'Subscribe' box to the right of this blog post (if you're on a mobile device, you'll need to switch to Desktop View to see it).